Hey, I was surprised as anyone when I heard that Leeds is a popular spot for hen weekends. Leeds is actually a really underrated city when it comes to things to do when the lights go down. There are dozens of great pubs and clubs and it’s hard to find the time to fit everything in! So, come and have a look at just what this great city has to offer you on your hen night. 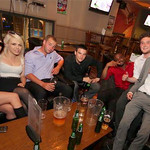 £ 18.99
Get a queue jump & plenty to drink at the Bierkeller Bar in Leeds, hen deals available, we can also arrange transport and other activities for a great hen weekend.

Butlers in the Buff 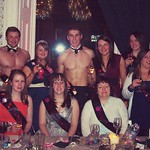 £ 129.99
If you have ever fancied the idea of having your own personal butler, then Butlers in the Buff is for you. Easy an quick to book today

£ 18.99
Hen nights are all about having a fantastic laugh with your best mates. Of course, you can always make each other giggle all night. Easy to book online now 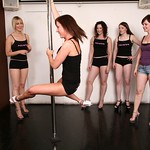 £ 31.00
A fun option for a hen party in Leeds, enjoy one of our range of dance classes from professional instructors! Book online of give us a call. 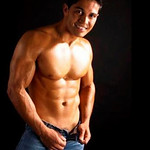 £ 149.99
Give your blushing bride to be something to really blush about - a close encounter with one of our gorgeous male strippers! Easy to book today 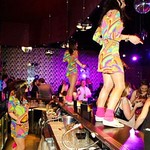 £ 9.99
At HHQ we look for the best clubs in a city, and this one ticks the box for Leeds, we can of course book a meal and also daytime activities really easily. 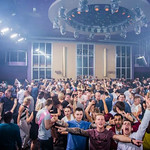 £ 9.99
Get VIP entry into one of the sensational clubs in the UK! Easy to book through Hen Headquarters along with other activities. 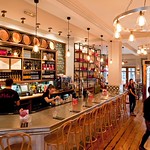 £ 19.95
Tapas Meal in Leeds in one of our top tapas restaurants. Includes welcoming and friendly staff, wide selection of Spanish cuisines.

Here are some of the best places to consider when it comes to great ideas for a Leeds hen night!

I’m a big believer in the idea that one of the best ways to get a hen night off to a great start is by going to a comedy club. This is one of the best clubs in Leeds and it gets some of the top names in comedy to entertain you. A live comedy show is always a brilliant laugh and normally three comedians take to the stage and an MC keeps things going between the acts. So, grab a few drinks from the bar and just sit back and laugh until you pee a little bit … don’t worry, I won’t tell anyone!

If you want to get into the party mood, then why not learn some amazing dance moves at the dance workshop? You can learn all sorts of cool dances here. If you want to be all sexy, then try the pole and burlesque dancing. Or, if you’re feeling a little groovy, then you can show off your best 70s’ dance moves. We tried the Dirty Dancing moves and we had a great time! Even if you have two left feet, you’ll enjoy yourself here and you’ll even pick up a few moves that you can use in the nightclub later on!

Tiger Tiger is a fantastic club that boasts an incredible eight different areas to party in with each one having its own theme! There’s the Groovy Wonderland, the Red Room, the White Room, the Jewel Bar and many more. Eating, drinking and dancing – what more could you wish for? This is just such a cool club and one where you can really spend the whole night. We had at least one drink in every part of the club but we spent most of our time in the ‘funky’ Groovy Wonderland! What makes a night at Tiger Tiger just that little bit better is that you can pretend you’re a superstar by getting yourselves onto the VIP list so you don’t have to wait in the queue outside.

I bet there’ll be a few odd looks and raised ‘drawn on’ eyebrows when you tell your friends that you’ve booked a butler in the buff! You can book a really sexy and fit guy to come with you to a bar in nothing but an apron. He’ll then wait on you and get your drinks and food, or whatever you tell him to do … although there are some limits! This is great fun and it will certainly be something that the bride-to-be and the rest of you girls will remember for a long time.

I was lucky enough to go to Pryzm when it had just opened up in 2014 and I can honestly say that I’ve never been to a club that has more big screens or crazy bright lights than here. Pryzm is one of those clubs that just does everything right. It offers different areas to go and party in, there are more than enough bars and it’s just got a really wild party atmosphere. If you love clubbing, then you’ll have a fantastic hen night here. Even after I’d left, I could still see the bright lights … actually, on second thoughts, that might’ve been all the alcohol! Anyway, this is an awesome club and you girls will love it.

It doesn’t matter if you’ve got the okay and have arranged for this to happen at a bar or if you’re planning it in your hotel, a male stripper is always a great laugh on a hen night … unless you’ve got an elderly relative on your hen night (actually, she’ll probably be really into it as well!) Anyway, it’s fabulous fun watching some sexy guy taking his clothes off. There’s nothing better than seeing one of your friends getting really embarrassed as a hunky guy shakes his butt right next to her face. There’s a good selection of blokes here and plenty of costumes to pick from. So, do the bride-to-be a favour and let her watch a hot buff guy!

We’re not done yet! I’ve found another four amazing hen night ideas for you hard-rocking ladies to consider in Leeds!

Opera, ballet or a live stage show are all on offer (well, not at the same time) at the Leeds Grand Theatre. Some hen groups like to have some kind of activity or attraction to go to before they hit the bars and clubs. A night at the theatre fits the bill perfectly. The Grand always has great shows so it’s worthwhile checking what’s on. There’s a real mixture with variety acts as well as comedians and live bands.

If it wasn’t for things getting in the way, then I’m sure you could’ve been (like me) the next Whitney Houston. Well, to be fair it was my lack of singing ability that got in my way but I still love to sing and that’s why I love to recommend a good karaoke bar for a hen night. In this venue, there seems to be an endless choice of songs to pick from as well as a very well-stocked bar so anyone who is too embarrassed to sing can get some much needed liquid courage! For a really fun time before you go clubbing, you cannot beat a karaoke bar.

For some people, the whole dance music scene is not really their thing and I can appreciate that. So, with that in mind, why not try The Wire Club? This is an underground-type club that specialises in playing indie music and getting indie bands to play live. It’s a really cool place to hang out. It’s nice and relaxed and it offers a much different experience to what you would get in a hard-core dance nightclub. So, if you want to party but not to dance music, The Wire Club is where the rock chicks should head for.

Next, we go from an indie-style club to a really mean and moody house/dance music club – Club Mission. Club Mission has a really good reputation for being one of the UK’s best nightclubs for specialising in house music. The dance floor is always packed with people having a great time. This club is for those of you who really like to get up and dance and get lost in the music (could I sound any cheesier?). If you want to dance so much that your feet hurt the next day, then this is the nightclub for you.

Here is some extra information about Leeds such as where to eat, where to hear live music and even info on A&E departments … I told you it could save your life!

For Your Main Meal

If you want to make a big deal out of eating together, I suggest you head to Fazenda Bar & Grill. This is a South American-style place and it specialises in Brazilian food. It’s really nice and very exotic and in general it’s a cool place to have a nice meal together. But, as well as serving exotic food, you can also get more traditional grub such as burgers and steaks for the more fussy eaters.

A Fun Way To Eat

If you want to eat somewhere that’s just as much about having fun as it is eating, then head to Rosie’s Diner. This is an American-style diner with hot dogs, burritos, burgers, chicken wings and many other tasty treats to try. We had a tremendous time here and the food was amazing. As a matter of fact, we ate here on the Saturday evening and then went back again for lunch on the Sunday before we went home!

Amber Cars and City Cabs are just two of the late-night taxi firms in Leeds. There’s no need to worry about how to get a taxi back to your hotel when you’re well and truly plastered!

I’ve been checking out towns and cities for a long time now and I realise that when alcohol meets a bunch of crazy ladies, anything can happen. If you do need some medical treatment, the Leeds General Infirmary will make sure you’re okay!

Where To See Some Live Music

We saw a good local indie band play at The Hi Fi Club and we were all pretty pleased with the venue. They host loads of gigs here during the year and they cater for various styles of music which is really cool. They have rap, rock, indie and pretty much any other style of music you can think of.

Chilling With A Drink In Your Hand

If you want something a bit more relaxed and quiet, then a drink or two at the Lazy Lounge is a great idea for your Leeds hen night. Whether you want to use this place to get ‘warmed up’ before going to a more ‘intense’ bar or whether you want to use it as somewhere to end the night with a quiet drink, the Lazy Lounge is just a really lovely place for a few glasses of wine and a nice calm atmosphere.